Wrington Drama Club and Wrington Youth Drama’s winter production  (January 2017) is ‘Jack-In-The-Box’, a long-forgotten pantomime written in 1873 and performed at the Theatre Royal, Drury Lane, that same December.Responding to appeals for a traditional pantomime, WDC decided to look at the spectacular shows that were produced in the mid to late-Victorian era, often with multi-million pound budgets and casts running into hundreds. While there can be no exact reproduction of this in the village hall (!) the drama club can at least provide something of the flavour of real Victorian pantomime, as opposed to the predictable version audiences across the UK experience every Christmas.

Jack-in-the-Box is story is of a prince disguised as a labourer who arrives in the kingdom of Storyshire, reputedly the stupidest place in England, in search of a beautiful princess whose picture he has only seen. 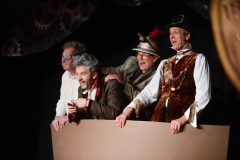 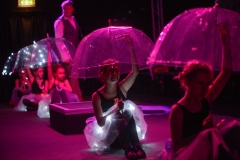 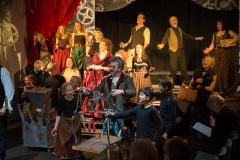 After helping the locals to build a boat, the prince is transported to fairyland, where a fairy convinces him to buy a magic Jack-in-the-Box toy which, he is told, will help him woo the princess.

On the prince’s return to Gotham the Jack-in-the-Box runs riot and the princess is located. However, she (and her father, the King) prove to be as dimwitted as their subjects so Jack-in-the-Box turns them all into children (specifically fairytale characters) in the hope that they will regain childlike virtue. And it works!!

Rachel Bowers has provided an updated script and the show is being directed by Julie Kingcott, who devised and directed WDC’s spectacular winter hit ‘Wind in the Willows’ last January. There is original music by David Tisdall, who scored last year’s show, and once again audiences will be treated to an ambitious, well-crafted and highly visual production that far exceeds any accepted notions of ‘amateur’ theatre – that’s a promise!